The Descendants Of Somerled: DNA Evidence  Page Menu (at bottom)

The genealogy of the present Clan Chiefs is well known. It is presented in Peerage books such as the current Burke's [Burke's 2001]. Sellar [Sellar 2000] discusses the details of the first few generations. The genealogy of large numbers of lesser lines is presented in  the 1904 book on the Clan Donald by the Revs. A. and A. MacDonald [MacDonald 1904].  In addition we have received well to fairly well documented lines all the way to Somerled from several  of our participants, one being Allan Douglas MacDonald, Chieftain of Vallay. These are presented in the following descendant chart. Names of near ancestors of living participants who are not clan Chiefs have been removed for privacy reasons, but we have them in our records. The three Chiefs are Sir Iain, &CXYIE, Aeneas Ranald &5XOBA, and Ranald Alexander &ED4CL. The two Chieftains are Allan Douglas &BATPB of Vallay and David Foster &5SFKF of Castle Camus.

Recent SNP results from BigY tests have superceded STR profiles, which are much less reliable, for deternining Clan branches.    Those who have tested by BigY can be seen on our BigY DNA page. Castle  Camus is probably the only group that can be distinguished with STR haplotypes.

The key person in our discussion is John, Lord of the Isles, who died in 1386. He is often known as "Good John". He was progenitor of most but not all of those Somerled descendants we have in our study. The calculated haplotype of Good John is the same as participant &PGTBN to 37 markers. We have descendants of four of John's sons. Fourteen of these have excellent paper trail pedigrees and four more a near-perfect one, verified by SNP DNA tests. From these men's pedigrees and haplotypes we can measure a mutation rate of 0.0043±.0009 (one standard deviation) per marker per birth. The value calculated by the Webmaster from all available data, both academic papers and surname studies, is 0.0031, only slightly more than one standard deviation off from our Clan Donald value. This is well within the expected range. Two other statistical tests are possible to perform on our data. One test compares the number of mutations observed for each marker in our study to the known mutation rates; these should be compatible, and are. The number of mutations in each of our lines is actually expected to be different: it should follow a Poisson distribution, and it does, to a remarkable degree of accuracy. Similar calculations have been done using the SNPs measured in our BigY tests, and these agree very well in the ages of the branch points.

Three of these lines, those of  Ardnamurchan, Keppoch, and Dunnyveg, are of lower quality than the others. They depend on somewhat dubious links across the ocean. The lines from emigrants agree with the old sources mentioned above up to the crossing of the seas.

The green boxes at the bottom indicate men for whom BigY data is available.

Our project has several R1a McAlisters, MacAllisters, and Alexanders. Alexander is considered a variant of MacAlister. For none of these do we have full paper trails, though the ones with listed lines have family tradition that they originate from the listed line. The data for these people is shown below. Only markers for which at least one person has a difference (highlighted in pink) from the "Somerled" haplotype are shown. The "Other" column shows how many more markers match the Somerled profile exactly. 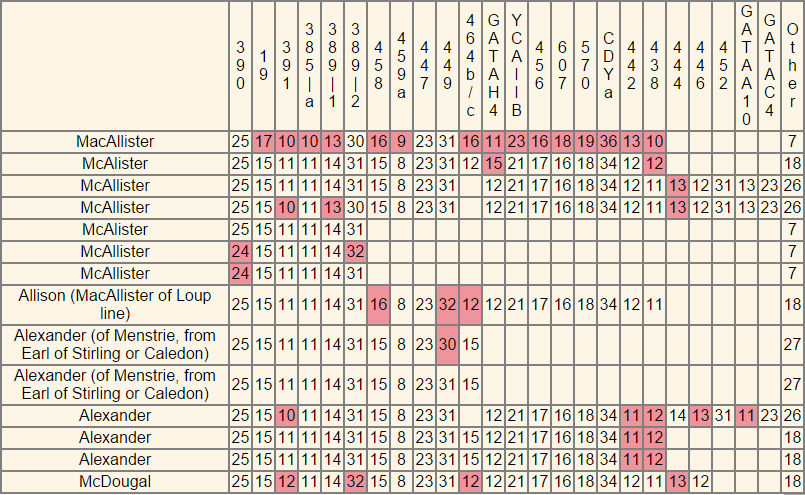 The same tests described above can be applied to this data. This analysis confirms that the main R1a Clan Donald line is indeed the line of Somerled's grandson "Donald the eponymous". The marker DYS458 appears, based on this limited data, to distinguish MacDonald from MacAllister. One R1a participant from Glencoe (whose line branches off from a brother of Lord John) also shares 15 at DYS458. We now beleive that we have sufficient data to show that the ancestral state was 15 at DYS458 and that the actual mutation occured with the birth of Lord John himself, or his father. While this is not absolute proof, we consider it reliable at the 98% or better level. DYS458 is a fairly fast marker, and we do see what are likely back and parallel mutations. The number we see is quite accurately in accord with the known mutation rate. The pattern of 11 at DYS442 and 12 at DYS438 is indicative of the name Alexander, though we do not know at all if this is a universal diagnostic. BigY results show another mutation, known as CLD56, that arose in Lord John himself. This ia not a SNP but a rather gigantic delete (thousands of bases) that occurred in a region containing large numbers of a 125 base pair repeat unit. So far CLD56 been testable only by BigY or other full sequence tests.

Proof of the line of Somerled himself has now become quite secure. The best evidence that he was the paternal grandfather of Donald comes from the BigY results of the MacEacharn/MacEachron lines and MacDougalls. MacEacharns have oral tradition of being descendants of Somerled near anceators, and interestingly these tales agree with the DNA results in their order of branching off. We now have obtained BigY results from several R1a persons born with the surname MacDougall. These men, one shown above, as well as on our BigY DNA page, match the McAlister pattern of STRs rather than that of Lord John, and have a unique SNP, YP5543. This is now excellent evidence that there really are living male line descendants of Dugall, another son of Somerled said to be a progenitor of the name MacDougall. But absolute proof of the line through Somerled to Donald still remains just beyond reach, as we consider that it requires a full paper trail back to Somerled's day, in addition to the DNA evidence.

By looking up the number of men in the USA, the UK, and Australia and estimating the number in Canada, whose surname is McDonald, MacDonald, or  McDaniel (strangely, MacDaniel is exceedingly rare everywhere) and multiplying by the percentage in our project who are descendants of Somerled (19%) we estimate that Somerled has over 43,000  pure male line descendants worldwide.